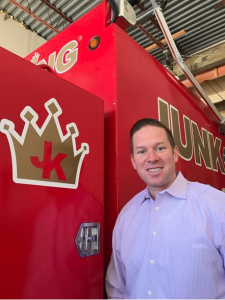 In January 2020, Tom McCabe said goodbye to the corporate world and concentrated on a new career in hauling junk — or, to be specific, in growing his family’s Junk King Tri County franchise covering Fairfield, Westchester and Putnam counties and Junk King Hudson Valley covering Rockland County.

“I had worked for Enterprise Rent-A-Car for just over 18 years,” the Danbury resident said. “My dad originally got involved with Junk King and was running the day-to-day operation back in 2017. I would kind of help on nights and weekends and offer assistance with marketing suggestions, search engine optimization-type things and with QuickBooks.”

Junk King was founded in California in 2005 and now has more than 100 franchises across 32 states and Canada. While McCabe was already familiar with the junk removal business, he was not expecting the dramatic changes that would be required of his operation when the Covid-19 pandemic began.

“People were really apprehensive about how this thing was transmitted, and many people didn’t want you in their home or business just because they were really scared,” he recalled.

“So, we pivoted pretty quickly and offered a touchless service where customers could put all of their unwanted items in either a designated room or in their garage or in the driveway. Now, if we do go into the house, we’re only going into one room and we’re socially distanced.”

McCabe also added a pay-by-phone service to accommodate customers who wanted to remain extremely distant. But even with these changes, McCabe experienced an abrupt downturn in business during the early period of the pandemic.

However, rather than stay idle while waiting for the phone to ring, McCabe began to investigate if there was an endeavor that his Junk King team could pursue to help others whose lives were acutely impacted by the pandemic.

“Back in March when Covid first started, I connected with the Hillside Food Outreach pantry in Danbury,” he said. “The food pantry also delivers food, so myself and my drivers would communicate with the food pantry and say, ‘Here’s where we have jobs the next day — if you have any deliveries, we could try to make the deliveries on the way to our jobs.’”

After establishing a connection with the food pantry, McCabe hooked up with the United Way of Western Connecticut, which in turn put him in touch with the Danbury location of Boehringer Ingelheim.

“Boehringer would make meals in their cafeteria and box up these meals,” he continued. “Then, I would put them in our big truck and we would bring them to their either their apartment complexes or condominium complexes. Myself and other volunteers would hand out these food bags to kids who were dependent on the school system to provide them a meal or two per day, but were missing out on meals because they were not in school.”

While this was going on, McCabe also partnered with the nonprofit Volunteers Open Worlds to expand food delivery services to those in need. He also hooked up with the Oxford Police Department and the Connecticut State Police on a toy drive that resulted in the delivery of toys to 600 children, and then partnered with the Boys and Girls Club in Ridgefield on their toy drive.

“It was great to see the smiles on those kids faces that might otherwise not get anything for Christmas,” he said.

McCabe’s work did not go unnoticed by the corporate Junk King hierarchy. At the company’s recent annual conference, McCabe received the Good Samaritan Award presented annually to the Junk King franchise that goes out of its way to help its community. McCabe accepted the award in a virtual ceremony, thanking his team for their work and noting he was “always looking for more organizations to partner with.”

As the pandemic begins to recede with the rollout of vaccines, McCabe said he is looking to further grow his business this year.

“We’ve hired multiple new layers of management, and for the first time we hired a general manager to help assist with the day-to-day operations,” he said. “We also hired a supervisor for our Danbury location. Our goal is to keep hiring these great high-level, big impact-type people and retain them for the long haul.

“And then,” he added, “we want to try to continue to be involved with community-engagement-type events. We want to do more and more of that every year.”