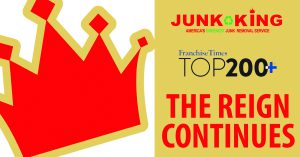 BURLINGAME, Calif. – Junk King has been named to the 2020 Franchise Times’ Top 200+ list among 500 of the largest and most reputable franchise systems in the United States. This is Junk King’s first time being recognized on the list.

Over the past year, Junk King has ramped up its growth efforts by expanding its franchise development and corporate team as well as launching a new franchise website. It led to the brand achieving its 100th franchise location milestone in the United States.

“Being celebrated by several key publications in the industry like Inc. Magazine and Franchise Times for the first time this year has been extremely rewarding for us,” said Michael Andreacchi, CEO of Junk King. “Everyone including the corporate team and our franchisees have continued to step up over the past year and I couldn’t be prouder of what we’ve been able to accomplish together.”

Using a combination of companies’ voluntary reports and the most recent franchise disclosure documents, the Franchise Times Top 200+ is an annual ranking of the 500 largest franchise systems in the United States by global systemwide sales, based on the previous year’s performance. The project is the outcome of a five-month research and reporting effort each year that results in the most credible and objective franchise ranking available.

Junk King, the nation’s top-rated junk removal and hauling company, is known for its professionalism emulated through its eco-friendly recycling, award-winning customer service, state-of-the-art technology systems and the clear indication it places on customer satisfaction. As the brand grows, it continues its efforts in making the world a better place for generations to come.

Individuals interested in franchising with Junk King can learn more about the franchise opportunity by visiting https://franchising.junk-king.com/.

Junk King is a white collar business management franchise in a blue collar industry with company operations showing more than ten years of sustainable growth. The company is firmly entrenched as the second largest and fastest growing player in the still young junk removal industry. Junk King launched its franchise in October 2009 and has awarded more than 100 new franchises, including two Master licenses in Canada. Junk King has a flexible, easy to scale model with a quick start-up and few fixed costs. The company has also expanded into the dumpster sector, offering additional services and revenue streams to franchisees. To learn more about Junk King, please visit https://www.junk-king.com.